My Unforgettable Year by Adem Besim 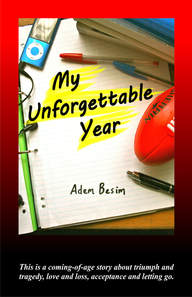 This is a coming-of-age story about triumph and tragedy, love and loss, acceptance and letting go.

Life's looking pretty awesome for 17-year-old, Nathan Thompson. He's the goal-kicking superstar from the small town of Kyabram. Nathan's in his final year of school and has big plans set for the future; like winning the Thirds’ premiership cup, acing his Year Twelve exams and finally graduating. One problem – his tough, and over-bearing father, Mark, has other plans for him. He desperately wants Nathan to be the next AFL player to come out of Kyabram.

He seems set to stop Nathan from following his dreams of studying architecture at university. But a thirty-year-old secret of Mark's that resurfaces on Nathan's 18th birthday changes everything. Will it force Nathan and his father further apart or help them reconcile their fragile relationship?
On top of that problem, Nathan’s year gets worse as he deals with death, bullying and first love.